Anomaly detection has always been a challenging research field. An anomaly indicates a sudden and short-lived pattern change, while a detection algorithm aims to identify anomalies promptly. Detecting anomaly on networks levels up the problem as network monitoring devices usually collect data at high rates, which means a network anomaly detection algorithm should handle high-dimension, noisy, and massive data under power and communication constraints. We should also acknowledge that different anomalies exhibit themselves in network statistics in a different manner. A general anomaly detection model often does not exist. A model that detects surprising edges in a network is probably cannot detect micro cluster anomalies.

There are multiple ways to formulate a network anomaly detection problem. The simplest method is to calculate the mean and variance of any connection IP pairs and raise an alert once the connection count is away from 3 standard deviations of the means. This method holds an assumption: the connection count follows a Gaussian distribution. This assumption is strict and often false in a real-world situation.

Pic 1. Distribution of connection counts from a real-world dataset, which is not a normal distribution.

Researchers had studied various machine learning approaches to this network anomaly detection problem. To represent a net flow, one either extracts hand-crafted features, such as ﬂow packet size, amount of specific signals, or build the representation automatically with deep neural networks, such as CNN. Afterwards, they either build an unsupervised model with an Isolation Forest, One-class SVM, or a Deep Autoencoder with these representations.

MIDAS authors formulated this problem differently. Instead of net flow, they model the network connections a graph, which kind of the networks’ nature. Their algorithm is a graph anomaly detection algorithm that works on a dynamic graph, a sweet capability where the current graph anomaly detection algorithms lack. Current graph algorithms only process a graph snapshot at specific intervals. They do not consider the temporal characteristics, in which everything happening at the current snapshot is somehow related to the past. Here are two graph snapshots from the same network at two different times. They are related to each other, yet their snapshots tell an entirely different story. 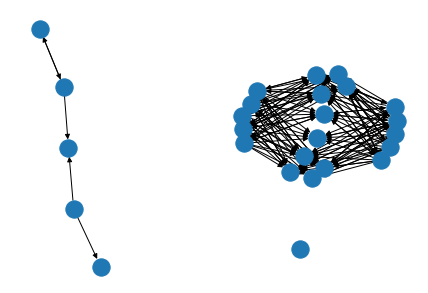 MIDAS has the following properties:

In general, MIDAS records the counts of every single edge with a Count-Min-Sketch data structure. Before we dive into their methodology, we should figure out what count-min-sketch is and why they use it.

We often use a hash map to maintain a counter:

To retrieve the count of some_key, we use d[some_key]. This method does not scale as the number of keys in a hash map could be huge. Therefore, count-min-sketch (CMS) aims to serve as a frequency table that consumes only constant memory. In other words, the required memory of CMS does not increase when the number of keys increases.

To use a CMS, we prepare $d$ different hash functions and the number of buckets of each hash function $w$. Then we initialise an matrix of size $d \times w$ with 0.

To update a count of some_key, we first hash some_key with a hash function $h_i$, and then increment the number at $cell(i, h_i(\text{some_key}))$. We continue this process until all $d$ hash functions have been used.

Of course, hash functions may conflict with each other due to the limited number of buckets. To retrieve the count of some_key, we get all counts of some_key from each row with $h_i(\text{some_key})$, then return the minimum value.

With the chi-square goodness of fit test, they score any newly arriving edge $(u, v, t)$ with the following equation:

Let us walk through the proof one by one:

Here is the pseudocode of MIDAS: 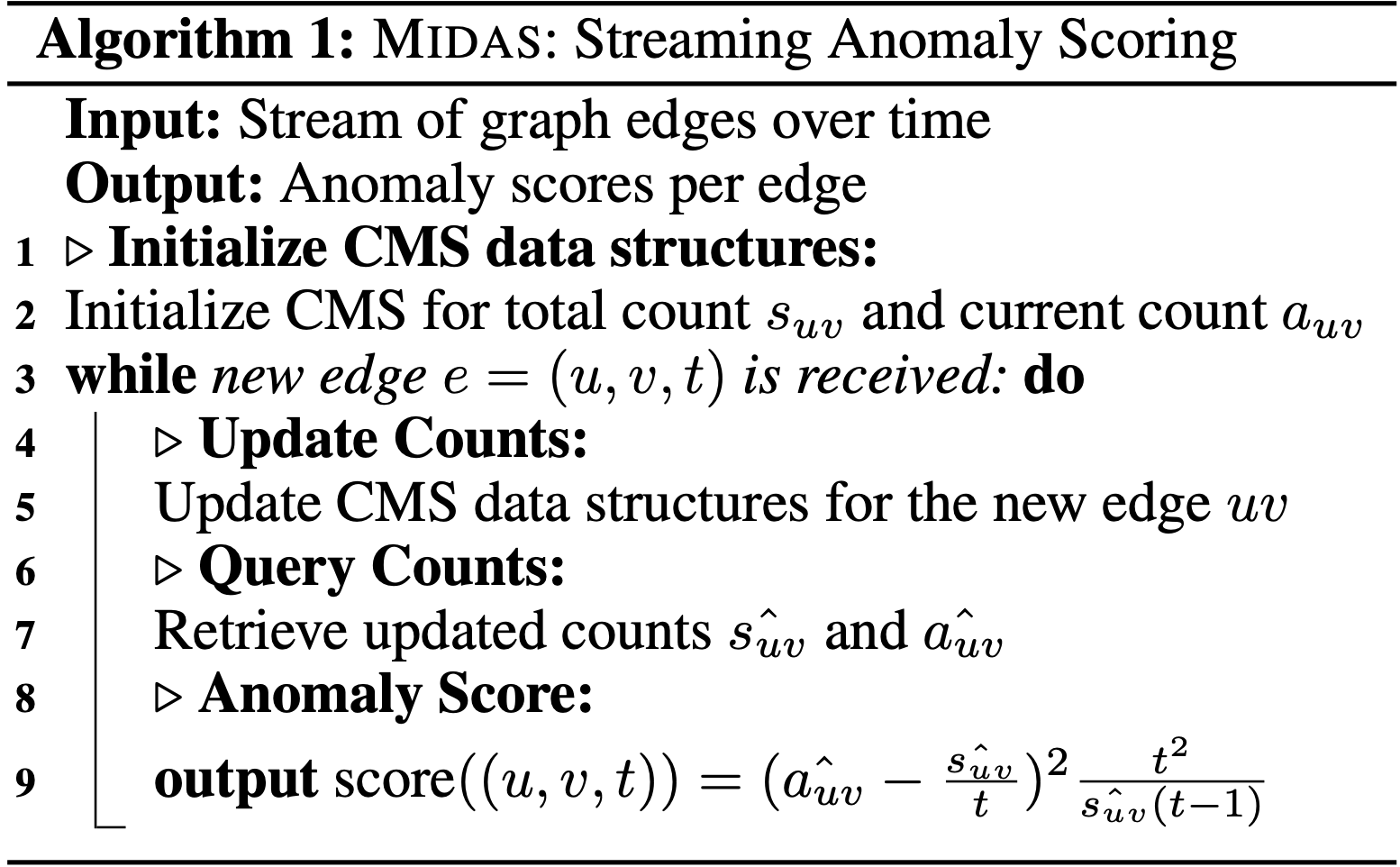 The “R” in MIDAS-R stands for “relations”. MIDAS-R aims to group related edges.

Besides temporal relations, MIDAS-R would also like to catch large groups of spatially nearby edges. Imagine there are lots of different hosts connected to the same machine A suddenly at $t=10$. MIDAS will probably not notice this anomaly as it scores the edges only. To tackle this problem, MIDAS-R creates four additional CMS structures, $a_u$, $s_u$, $a_v$, and $s_v$ to approximate the current and total edge counts adjacent to node $u$ and node $v$. Hence, for each incoming edge, MIDAS-R will compute three scores: one for edge $(u, v)$ as before, one for node $u$ and one for node $v$. Finally, it combines three scores by taking their maximum value.

Here is the pseudocode of MIDAS-R: 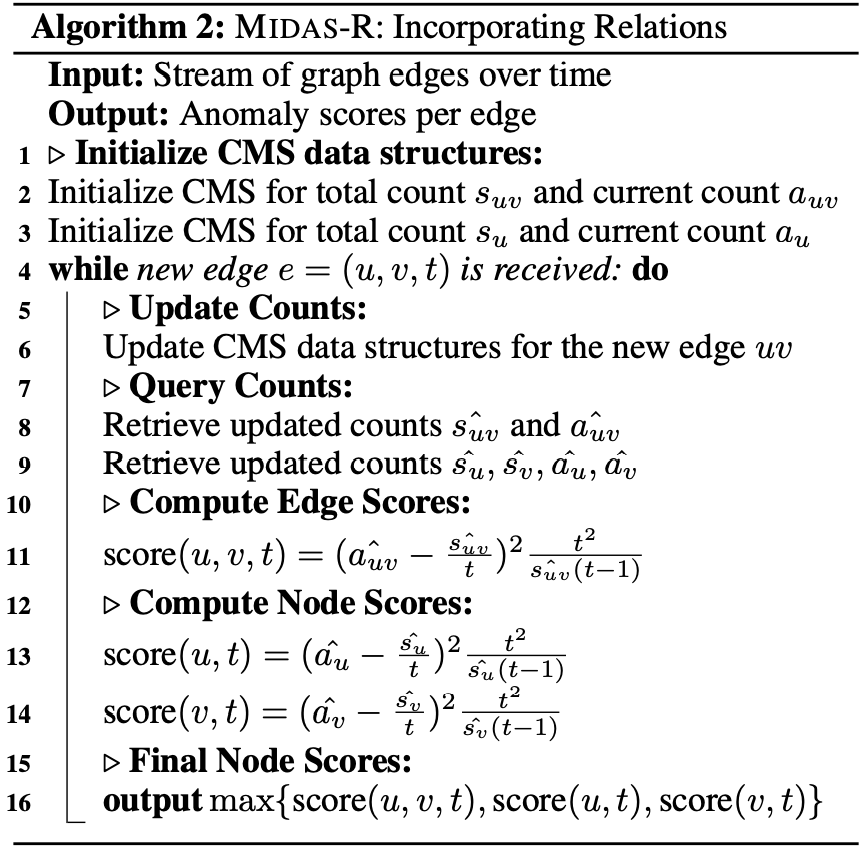 MIDAS and MIDAS-R are designed to update their records into their internal CMS structure immediately. Let us consider a DOS attack where many edges arrive within a brief period. At first, MIDAS can detect these anomalies. However, the mean level ($\frac{s_{uv}}{t-1}$) of the score increases as the attack continues, which leads to the increasing of the expected count of anomalous edge. Finally, MIDAS can no longer identify these anomalous edges.

MIDAS-F introduces a conditional merge method to decide whether the current count $a$ should be merged into $s$ to prevent this poising effect. It uses another CMS structure $c _{uv}$ to keep track of the anomaly score. Whenever the time tick changes, if $c _{uv}$ is less than a pre-determined threshold $\epsilon$, the $a _{uv}$ will be added to $s _{uv}$. Otherwise, the expected count ($\frac{s _{uv}}{t-1}$) will be added to $s _{uv}$ to keep the mean level unchanged.

Here is the pseudocode of conditional merge:

MIDAS-F also redefined the $s_{uv}$ as the total number of edges from $u$ to $v$ until the previous time tick, not including the current edge count $a_{uv}$, leads to a minor change of scoring function:

Here is the pseudocode of MIDAS-F: 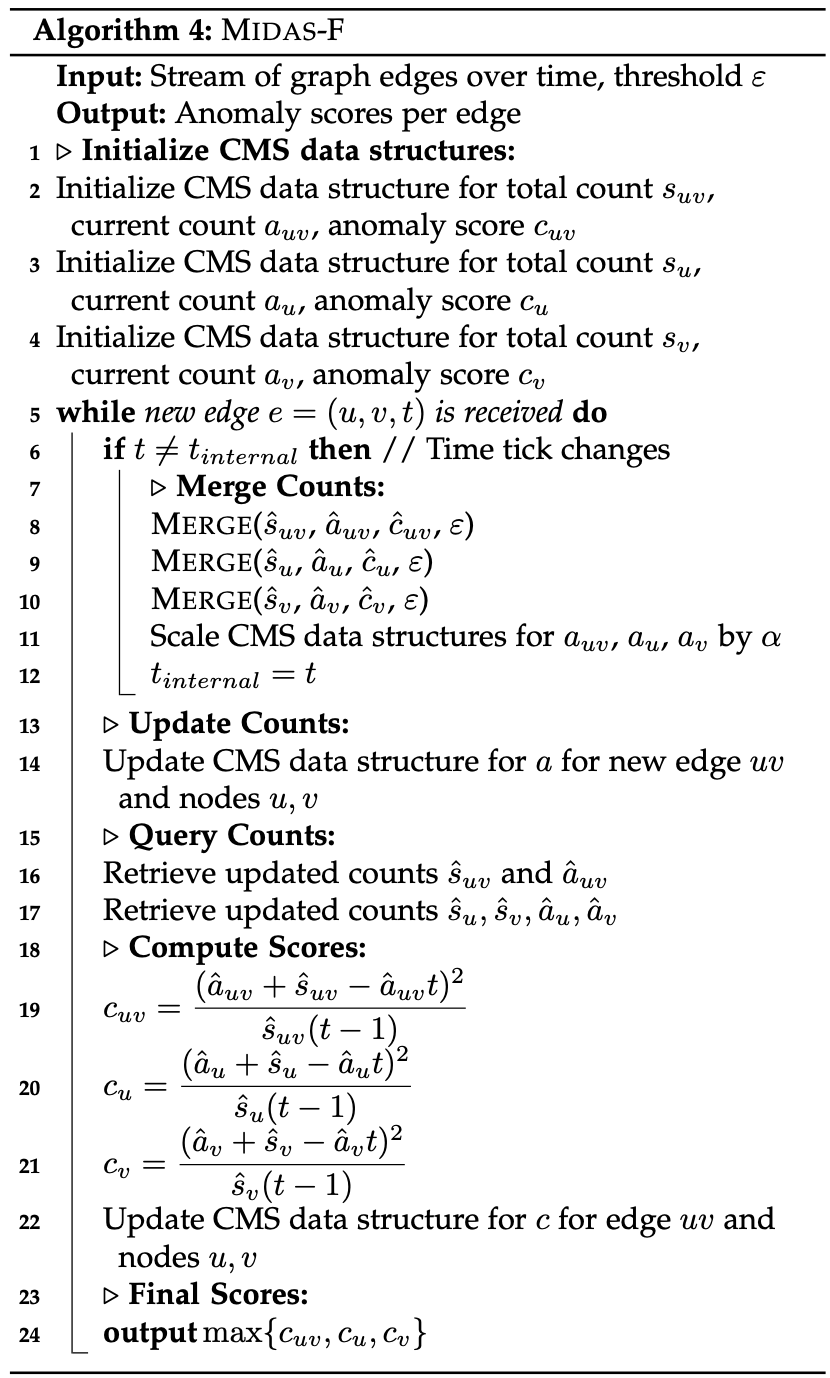 Before install, make sure you have Cmake >3.5.

Then change to the MIDAS directory and install:

I wrote an example of using MIDAS on real-word dataset here: MIDAS Example.ipynb

MIDAS is both a scalable and effective anomaly detection algorithm. There are several remaining problems we have to solve before deploying MIDAS into the production environment.

There are two needed thresholds in this algorithm. One is the $\epsilon$ in MIDAS-F, while the other one is to determine an instance is an anomaly or not. Unlike other supervised learning algorithms, where we usually set the threshold at 0.5, MIDAS’s score is unbounded. A systematic method to find thresholds is in need.